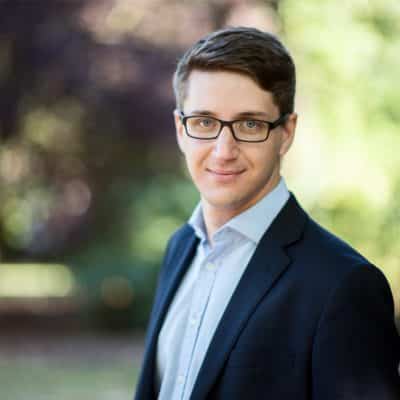 As Organist and Director of Music at St James’s, Sussex Gardens, in London’s W2, George continues a musical tradition that has included such distinguished organist-composers as Dr Harold Darke and Sir George Thalben-Ball. He is also College Organist and Head of Choral Music at Wellington College, where he runs the Chapel Choir, is on the full-time teaching staff, and is an Assistant Housemaster. He is accompanist of Crowthorne Choral Society.

George is a prizewinning Fellow of the Royal College of Organists. He has broadcast on BBC Radio 3, Radio 4, and Classic FM, and has recently given organ recitals at Westminster, Chester, Liverpool, Bristol, Sheffield, Edinburgh and Truro Cathedrals, as well as at many of London’s major churches. He fulfils series of annual engagements across the South of France.

George was a choral scholar at The London Oratory School before taking up the Parry-Wood Organ Scholarship to Exeter College, Oxford. There he gained a First Class honours degree in Music, and was solely responsible for the renowned mixed-voice choir. He also held the post of Master of the Music at Pusey House, Oxford’s famous Anglo-Catholic establishment. During his time at Oxford, George directed the musical celebrations for Exeter College’s 700th Anniversary, including performances in Westminster Abbey, Washington National Cathedral, and privately for the Queen of Spain. He led tours to Europe and the USA, and directed the world premiere recording of Charles Villiers Stanford’s Mass in G, Op. 46. The disc was praised by BBC Music Magazine and Gramophone, and led to George being named a Classic FM “Young Artist to Watch”. MusicWeb International praised his “stylish” direction, calling his recording of Parry’s Songs of Farewell “exciting and full of conviction”, while Martin Bird declared in the Elgar Society Journal, “George de Voil is something of a find… He may be young, but his innate musicianship, his feeling for line, for balance, for phrasing, for the placing of chords, is exciting…”. Choir & Organ remarked, “the fresh-voiced Exeter College Choir achieve a superb blend under their intelligent young conductor”. The disc was re-released in a second edition in May 2016.

Sign up for our newsletter to receive the latest news and event postings.